An incinerator and waste facility could be built near Mallusk, Co Antrim, under a new plan to deal with waste from 11 council areas in Northern Ireland.

Arc21 said it intended to develop the “energy from waste” facility at the Hightown quarry on the Boghill Road.

If planning for the site is approved, it would be one of the largest single infrastructure schemes to be undertaken in NI.

The investment is worth £240m and could create 340 jobs. It could also generate enough power for 30,000 homes.

The planned waste development would also include an adjoining “mechanical biological treatment” plant. It will sort recyclable material and then treat the remaining waste to make it more combustible.
Those behind the proposed waste facility plan claim it will help Northern Ireland meet EU targets on landfill diversion and ultimately avoid large fines.

The developers added that the Hightown quarry site was of “sufficient size and scale” to absorb the facility. 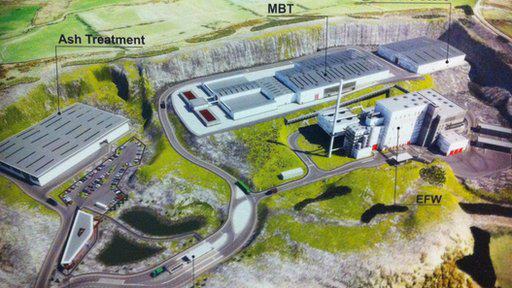 Arc21 is an umbrella group for waste management by 11 councils in the east of Northern Ireland and has been commissioned by the Becon Consortium to develop the facility at Mallusk, pending the “completion of a competitive procurement process.”

In a statement, the developers said the proposed site was “considered the best location for the new facilities as it is centrally located in the Arc21 area, and has good connections to the primary road network as well as the national electricity grid.”

The consortium is supported by E.ON Energy from Waste AG, a European company that currently operates 19 waste plants in Germany, the Netherlands and Luxembourg.

A public consultation on the plan is due to begin shortly.

This entry was posted in Industry News. Bookmark the permalink.